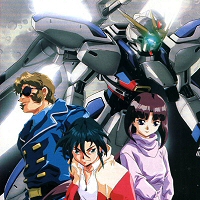 Other name: After War Gundam X

The terrible 7th Space War, an all-out war between Earth and space, began when one space colony declared independence from the Earth Federation. The Federation retaliated against the Space Revolutionary Army by developing mobile suits known as Gundams. The Space Revolutionary forces, on the other hand, used their trump card and dropped hundreds of space colonies onto the earth, plunging it into a seven-year nuclear winter. In the aftermath of the colony drop, the Federation crumbled, but the Space Revolutionary Army was unable to invade the Earth. It's been fifteen years. The year is After War 0015, and a New Federation has risen to restore order on Earth. The colonial elites have also been rebuilding their troops in space. Garrod Ran, a fifteen-year-old boy, happened to be in the wrong place at the wrong time.
Episodes