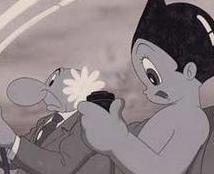 Professor Tenma is devastated when his son Tobio is killed in a vehicle accident in 2003. He gets lost in his latest idea, Atom, a robot youngster who is designed to be good forever. Tenma sells Atom to Ham Egg, the sadistic ringmaster of a robot circus, because he is frustrated that his Tobio-substitute would never grow up. Professor Ochanomizu adopts Atom and motivates him to become a champion against evil by building him a robot "sister," Uran.
Episodes