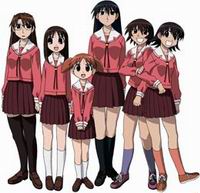 Chiyo Mihama starts high school as one of the oddest kids in her freshman class—a petite, 10-year-old academic prodigy who enjoys soft dolls and home cooking. Yukari Tanizaki, her homeroom teacher, is the type of person who would steal a student's bike to avoid being late, so "abnormal" is a relative term. In Yukari-homeroom sensei's class, there are plenty of oddballs. Chiyo is accompanied by pupils such as Tomo Takino, an exuberant tomboy with more zeal than intellect; Koyomi Mizuhara, Tomo's best friend with a shorter fuse than Chiyo; and Sakaki, a tall, athletic beauty with a soft personality and a severe fixation with cats. In addition, Ayumu Kasuga, a transfer student with
Episodes