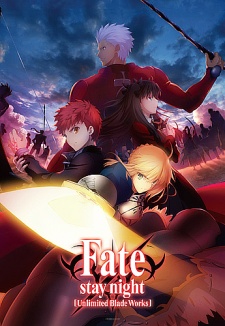 The Holy Grail War is a combat royale between seven Masters, or mages. Masters order Heroic Spirits known as Servants to fight for them in combat by using the command seals they are granted when they enter the conflict. Rin Toosaka is one of the mages competing in the Fifth Holy Grail War. She seeks to gain the Holy Grail, a mystical artifact capable of fulfilling any request, with the help of her Servant, Archer. Emiya Shirou, one of Rin's classmates, inadvertently enters the tournament and finds up controlling his own Servant, Saber. As they face common foes, Rin and Shirou decide to establish a temporary alliance as they engage their opponents in battle.
Episodes