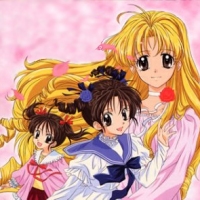 Other name: Full Moon wo Sagashite

Eichi Sakurai, Mitsuki Kouyama's buddy, departed to America two years ago before she could reveal her affections to him. Despite the fact that she is unable to reach him, they made a pact to pursue their separate dreams: Mitsuki wants to be a professional singer, while Eichi wants to be an astronomer. She dreams of one day having her music reach him all across the world with the brilliance of a full moon. The only catch is that Mitsuki has throat cancer, which causes her voice to be muted and singing to be difficult. Mitsuki's grandmother, who despises music, insists on surgery to remove the cancer, but she resists owing to the possibility of losing her voice. Meroko Yui and Takuto Kira, two shinigami, visit one day to inform her that she is pregnant.
Episodes