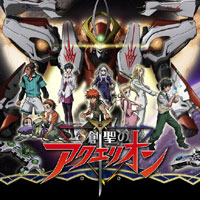 Other name: Genesis of Aquarion

Once upon a time, a species known as the Shadow Angels launched an invasion on Earth in order to collect the life essence of all humans who lived there. The Shadow Angels stayed dormant as a result of some incredible miracle, and mankind was allowed to live another 12,000 years without dread of their existence. However, 11 years after a disaster termed the Holy Genesis wreaked havoc on the Earth, the Shadow Angels were roused from their slumber and resumed their attacks. To offer mankind a fighting chance, an organization called DEAVA was founded, and the use of a robotic weapon called Aquarion was approved. To bring the Aquarion to full strength, three pilots must merge their hearts, bodies, and souls into one—a difficult undertaking.
Episodes