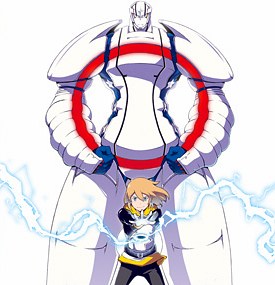 Joseph Carter "Joey" Jones lives with his grandmother in California's Center City and works at a coffee shop. Despite his family's financial difficulties and being tormented at school, he maintains a positive attitude. He is a robotics fanatic who desires a top-of-the-line toy robot known as a Heybo above everything else. Joey and his pal Simon "Psy" Kaina come upon a wrecked Heybo that has been dumped by a gang of privileged youngsters one day. He takes it home and fixes it himself, dubbing it Heroman with glee. However, Heroman gets struck by lightning one night and comes to life, expanding several times its original size. The same night, Center City is invaded by Skrugg aliens, whose attention was drawn to Earth by Joey's acquaintance Professor Matthew.
Episodes