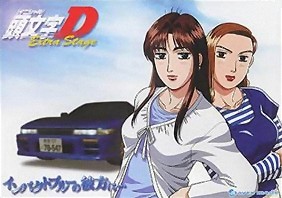 Takumi Fujiwara, unlike his pals, is not very interested in vehicles and has little to no understanding of the world of car enthusiasts and street racers. He is the son of a tofu store owner and is charged with delivering tofu every morning, traveling along the Akina mountain. Thus, discussions about vehicles or driving in general would only serve to remind Takumi of the exhausting daily routine that had been imposed on him. The Akagi Red Suns, an infamous squad of street racers, visit the village of Akina one night to take on the local mountain pass. The Red Suns want to conquer every racing circuit in Kanto, led by their two aces, Ryousuke and Keisuke Takahashi, and establish themselves as the quickest crew in the area. However, greatly to their surprise,  one of their aces is overtaken by an old Toyota AE86 during a drive back home from Akina.
Episodes