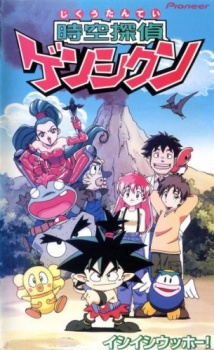 It is the twenty-fifth century. The evil lord has 'infected' history with time-devices that might irreparably harm history. When Genshi and his father became fossiles, they were living in the prehistoric era. They are discovered, and Genshi is reverted to his former form. With the aid of his father, a kid named Tony, and a girl named Sara, he must go through time to return the time-devices to the realm of time so that history might be spared.
Episodes