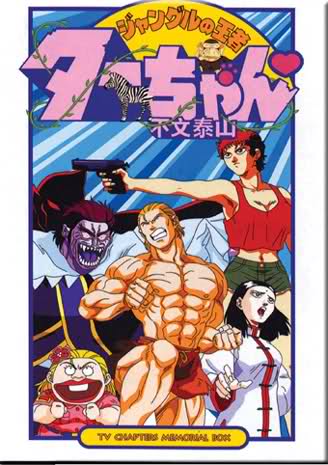 Other name: Jungle no Ouja Taa-chan

Ta-chan is the jungle's ruler. He was abandoned in the savanna and raised by a chimp named Etekichi. He has a lovely wife named Jane, who used to be a top model in New York but now appears... Anyway, Ta-chan is battling poachers with his apprentice, Pedro, and a master of Chinese martial arts, Ryo, to defend animals from poachers. This anime is based on the manga of the same name, and it opens with a humorous Tarzan spoof. The first few episodes are comedy, while the rest of the series is made up of (very) serious episodes.
Episodes