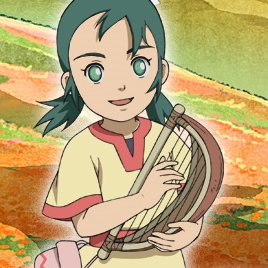 Other name: Kemono no Souja Erin

The adjacent provinces of Shin-Ou and Tai-Kou have been at peace in Ryoza. Ryoza is ruled by Queen Shinou, and her most formidable commander, Grand Duke Taikou, protects the kingdom with his army of strong war-lizards known as the "Touda." Despite the two areas' long-standing friendship, increasing tensions threaten to trigger a deadly civil war. Erin, a bright girl who spends her days observing her mother Soyon, the hamlet's top Touda doctor, works in Ake, a Tai-Kou village charged with creating the Grand Duke's army. However, while in Soyon's care, a tragic event occurs with the Grand Duke's strongest Touda, and the serenity that Erin and her mother had been enjoying is destroyed when Soyon is punished.
Episodes