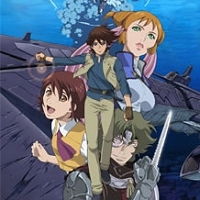 Mars is currently almost completely submerged in water. Humanity floats across the wide oceans on gigantic city-ships. However, living on Mars is difficult—the economy is in disarray, jobs are limited, and food is expensive and highly valued. Gram and his buddies do their best, but the job continues drying up. To resist government corruption, some have turned to piracy; one such organization is the pirates of the dreaded Ship of Aurora. And the Earth government, which oversees Mars, has sent a fresh squadron of military pilots to oppose them. They must make the oceans of Mars safe for humans in their customized mecha known as Round Bucklers.
Episodes