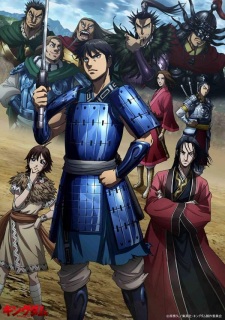 Following the triumph of the Sanyou war, the Qin army, led by 1,000-man Commander Xin, moves closer to King Ying Zheng's aim of uniting China. With a significant geographical footing in the state of Wei now under its control, Qin turns its attention eastward toward the remaining warring nations. Meanwhile, Li Mu, the newly appointed prime minister of the state of Zhao, has used Zhao's short peace with Qin to negotiate with the other states without interruption. Ying Zheng receives word, seemingly without notice, that soldiers from the states of Chu, Zhao, Wei, Han, Yan, and Qi have invaded into Qin territory. Zheng hastily collects his advisors to create a solution after realizing too late the intent of Li Mu's ceasefire with Qin.
Episodes