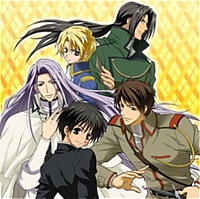 Maou kyou kara! centered around Yuri Shibuya, a typical Japanese adolescent. Yuri witnesses a student being bullied one day. Because of this intervention, his companion is able to flee, but Yuri becomes the new target of the bullies and has his head slammed into a toilet. Instead of water, the toilet has a spinning gateway that transports him to a planet resembling medieval Europe. He is informed that he will become the next Demon King because of his black hair and black eyes, which are only found in the demon's royal bloodline.
Episodes