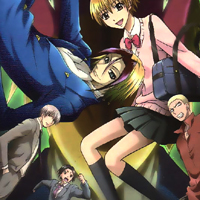 Yako Katsuragi is a well-known high school detective who, despite her youth, has solved several crimes. In fact, there doesn't appear to be a case she can't solve, or a criminal who can't be apprehended. The key to her prodigious crime-solving abilities, however, is hidden behind the walls of her detective agency: the cases are really solved by her assistant, Neuro Nougami. However, to refer to Neuro as an average man would be inaccurate. In actuality, he is a demon who has previously solved every mystery in the demon realm and has come to the human world in pursuit of the ultimate enigma. He feeds on the negative energy emitted by people when they commit crimes, using Yako as a surrogate. As a result, he offers to assist Yako in solving the mystery.
Episodes