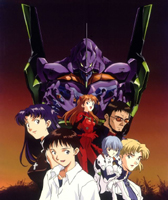 Fifteen years after the Second Impact, the planet confronts a new threat: terrible heavenly entities known as "Angels" invade Tokyo-3 one by one. Despite using the most modern weaponry and military strategies, humanity is unable to defend itself against the Angels. NERV, a secret organization directed by the frigid Gendou Ikari, is the sole option for human rescue. NERV employs massive humanoid robots called as "Evangelions" to confront the Angels with cutting-edge sophisticated weapons and Absolute Terror Fields. Shinji Ikari, Gendou's 14-year-old son, comes to Tokyo-3 after years of being abandoned by his father. Shinji fights a never-ending internal struggle against the deeply hidden anguish created by his mother's death and the emotional toll it has had on him.
Episodes