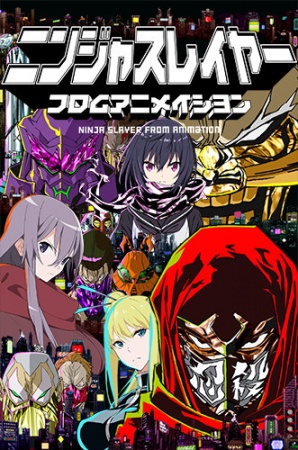 Other name: Ninja Slayer From Animation

Ninja... The Ninja were... In the age of ninja serenity, cruel demi-gods ruled Japan with their karate. However, "some" committed hara-kiri by keeping their spirits at Kinkaku Temple for eventual resurrection. Their lost past had been fabricated and disguised, and the truth about these ninja had long been forgotten. Now, in a future when cybernetic technology and electronic networks have become God, malevolent ninja spirits revived from thousands of years ago are released on the dark shadows of Neo-Saitama. Fujikido Kenji is a salaryman who lost his wife and kids in a ninja turf fight. Fujikido is possessed by a mysterious ninja soul as he approaches his own death. Fujikido outwits death and rises to the rank of Ninja Slayer. A Grim Reaper on his way to kill evil ninja, committed to a personal war of vengeance.
Episodes