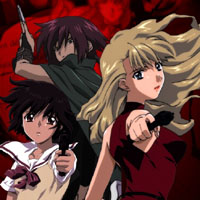 On a lovely afternoon in her Paris flat, assassin-for-hire Mireille Bouquet gets an odd email from Kirika Yuumura, a young Japanese student, encouraging her to "do a journey to the past" with her. She initially dismisses the email as foolishness, but changes her mind as it begins to play a tune she remembers from her childhood. When the two first meet in person, they are assaulted by gun-wielding guys. While Mireille is capable of repelling the onslaught, she soon realizes that Kirika is highly skilled in battle after taking down numerous shooters on her own. Kirika regrets her inability to feel guilt for her victims, despite her skill at murdering. Furthermore, Kirika apparently has no memory of how she came to acquire the skills she possesses or even of her real identity.
Episodes