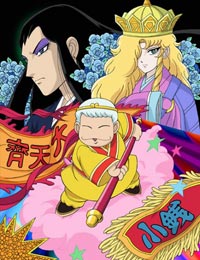 Patarillo! is set in a civilization that is, for the most part, similar to ours, with one notable exception. The manga on which it is based is one of the most popular works published for adolescent Japanese girls, with a good percentage of homosexual men and gorgeous youths referred to as bishounen (beautiful boys). The majority of the action takes place in Marinera, the paradise of endless spring in the South Seas. The country is a large producer of diamonds, which serve as a key source of conflict in the anime series. They originate from one of the world's most productive mines, owned by the monarch of Marinera, the vertically challenged but horizontally endowed boy-king Patarillo himself. The International Diamond Syndicate is a massive semi-criminal/secret organization.
Episodes