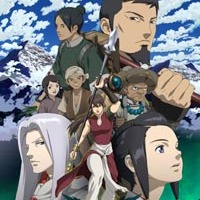 Other name: Seirei no Moribito

On the verge of a catastrophic drought, the Shin Yogo Empire's Star Readers must create a strategy to avert widespread hunger. According to old traditions, the first emperor, together with eight warriors, murdered a water monster in order to prevent a major drought and save the region that would become Shin Yogo. If a water demon appeared again, its killing may offer deliverance. The water demon, however, presents itself within the body of the emperor's son, Prince Chagum—by the emperor's decree, Chagum is to be sacrificed in order to rescue the empire.
Episodes