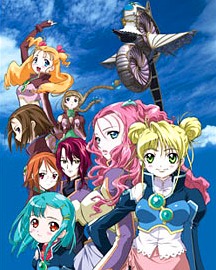 Everyone is born female in Simulicram's peaceful theocracy. At the age of 17, each virgin is subjected to a particular ritual in which she choose her sex. Only pairs of female priestesses, however, can synchronize with the ancient flying ships known as Simoun, which are required to protect Simulicram. These Pairs refuse to participate in the ceremony as long as they want to continue operating their Simoun. After a horrific attack by an opposing nation decimates the squadron known as Chor Tempest, Aer is recruited to be a Simoun pilot. She must make her way into the heart of Neviril, Regina of Chor Tempest, in order to earn her wings. However, Neviril's heart still belongs to her former Pair, who was killed in the conflict when she tried a banned Simoun move.
Episodes